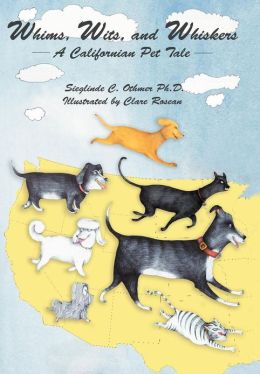 Well, 'Whims, Wits, and Whiskers: A Californian Pet Tale' is a very beautiful and exuberant take on a situation similar to the above one. Three pet dogs, bored with their routine life are happy to host two of their cousins (dogs). They discuss and realize that they all want to do something amazing, but are really unsure what this amazing thing could be. All are independent and have their own likes and dislikes and thus are unable to come to a consensus.

What follows is the sudden arrival of two of their other cousins, this time, cats from Hollywood. The cats are artists and know a great many skills. With the help of these cats, and of course, little hummingbirds, who interestingly join the story at many places, the cousins are able to find what they would love to do. Just like the famous line from Paulo Coelho's novel "The Alchemist", 'When you really want something to happen, the whole world conspires to help you achieve it', things start falling in place and an unexpected journey to another of their cousin's place enables them to achieve their dream. A dream they could live. All seven of them.

What holds the story is the innocent narration that allows the innate nature of the animals to come out so brilliantly. Each animal has a unique identity and a unique nature, their own strengths and weaknesses, their hopes, aspirations and desires from life and from others, much like humans. The way the natural surroundings are described, does not leave a feeling that something might be missing or that it wold have been better had their been something more or something different.

And it is not one of those goodie-good books that have all things going as per the best possible. The cat and dog fight, the brief fight for supremacy, the conflict of opinion, the sudden death of a benefactor, the crashing of dreams and thinking that all was over, all make the story really realistic and far more acceptable than an ordinary ever happy storyline might have been.

Having grown up on those numerous animal stories of Panchatantra and Jataka and the others, to get me to read an animal story from start till end, without my getting bored and then smiling, speaks a lot, a real lot about the book.

And yes, the book also has a little gift, an audio CD of the 'Fiderallalla' song these animals make. Some music lover friends of mine, who listened to the song, really liked it, despite having not read the book or knowing the context of the song. So, even the music scores as well as the book.